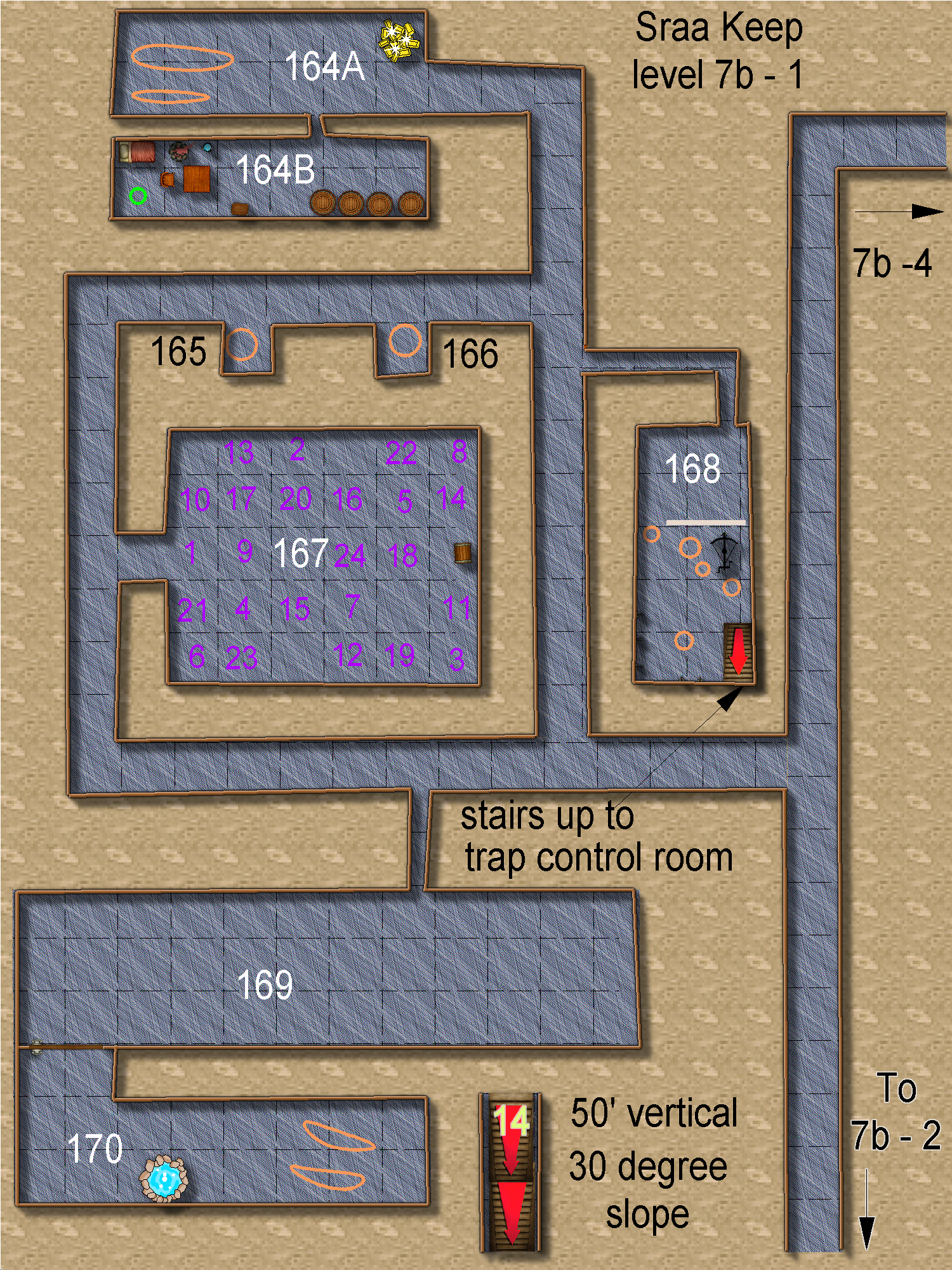 an elf princess lives here, captive of Strazl, she knows he is a liche.

If the party gets her out alive, her people will send them in 6 months 700 pp
and 2 scrolls of protection from undead.

She has barrels of food, a small brazier for cooking, a table, wooden utensils,
a pallet to sleep on, and a small stone basin of water. Nothing to fight with and win
against the fire lizards.

Medusa that has been illusioned to look like a statue on a 1’ tall pedestal.
will attack if touched.

A Permanent Illusion of a statue of an old man.

a chest is near the far wall from the entrance.

When all or most of the party has entered the room, the exit vanishes and blocks of rock fall from the ceiling and then go back up. Each block stops 2’ from the floor where the 10’× 10’ areas are marked. Roll 1-6d4 to determine which block has dropped. These blocks are controlled by the men in room 168. If stand, the character gets a SR vs. spells to get out of the way or suffer 5d6 hp. 1d6 hp if laying down.

This continues until the party exists or half the part is badly injured or dead.

5 fighters and a magic-user live here. Three are on watch at all times.
They control the blocks in room 167, the corridor blocks outside rooms 172 and 174, and the statue in room 156. ( If they are killed before the party reaches room 156, Strazl will control the statue magically. ) They also make sure the elf princess doesn’t leave room 164B, when the fire lizards are sleeping.

I never ‘determined’ just how they were watching all of these rooms.

They did have direct visual observation of rooms 164B and 167.

If they come under attack, they will defend themselves with the ballista. The 7th and 6th level fighters will fire their bows while the ballista is being rewound. The Magic-User will act as backup. The ballista has 100 bolts.

( in the original scenario I had stats and abilities for these henchmen of Strazl’s. Just consider them to be exceptional, otherwise Strazl wouldn’t have hired them. )

[ I sometimes used aligned armor and weapons to reduce the amount of such items the players would have to keep or resell. Besides, for evil characters it would make sense for them to have weapons good guys couldn’t use against them. ]

Don’t forget the cover/concealment adds the ballista shield gives them.

Magic-User 9, Dagger +1, Cloak of Protection +3, Ring of Magic Missiles ( 2 per melee round, can fire every other melee round.) Has Rary’s Mnemonic Enhancer and uses it for three first level spells. 5 Potions of Extra Healing made by Strazl.

If combat starts to go against them, they will go down the stairs to the room below ( room 221) and grab their 2 prisoners. Then they will head for level 9, Strazl’s Real Treasure Room, then escape out the tunnel. A 10’ thick block will move into the stairwell, completely blocking it. The prisoners are from a nearby village. If they are rescued, the party gets one gold piece as the village is poor; however, anyone in the party at the time of the rescue gets +1 to +3 to their lowest attribute. Of course, abiding by PHB maximums.

filled with various trophies put here by Strazl to show his victories
and those he tormented. Several portraits on the walls of his victims.
These portraits have a red background wash. Most show clothing styles from
20 or more years ago.

one item detailed is a Mirror of life Trapping

If the Mirror of life Trapping is broken, the stone door slides into the floor
and the manticore are released to attack those in room 169. The many bones
in this room are from Strazl’s victims.

The 2 prisoners were captured for their amusement by Strazl the liche. 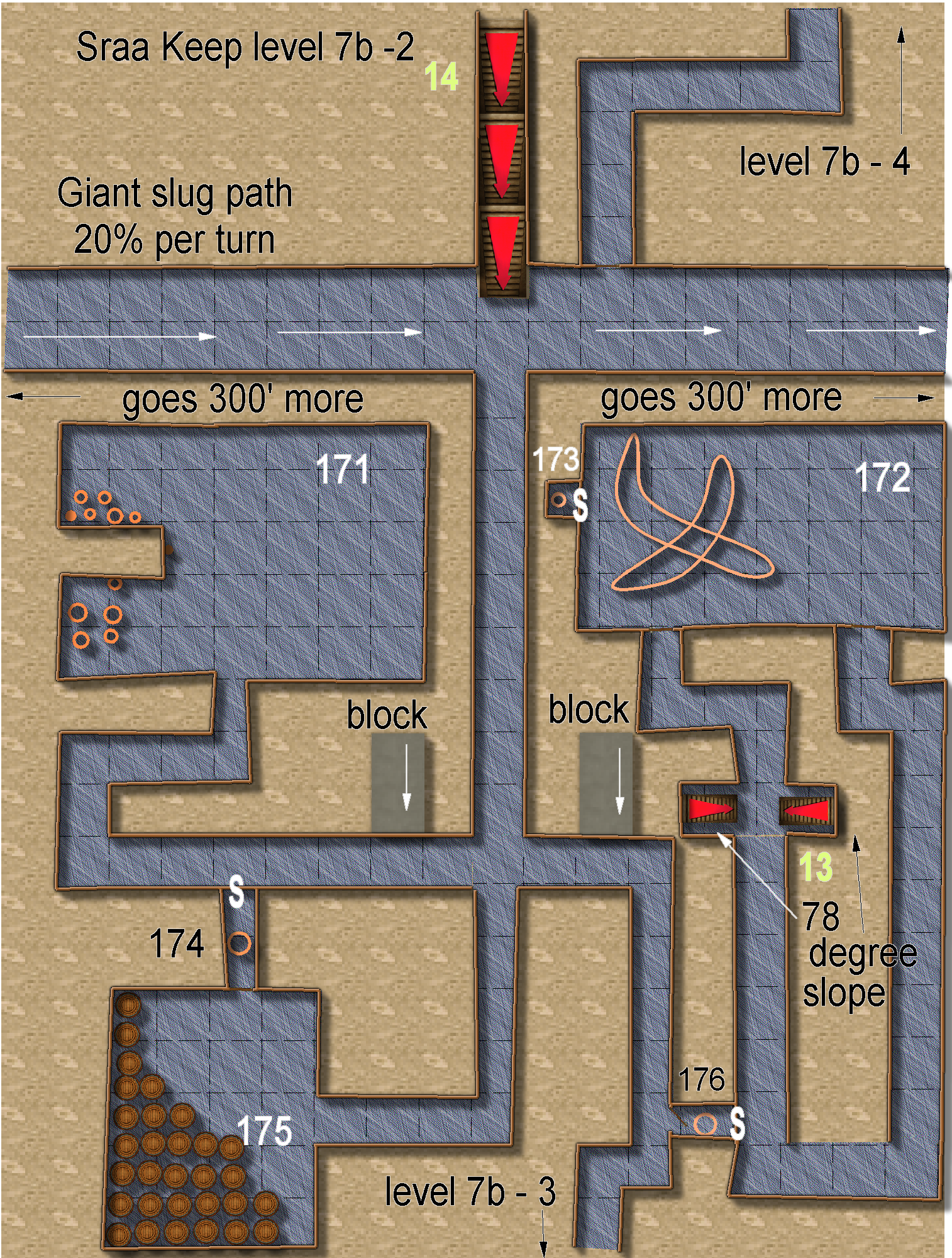 Its a migration route. The large tunnel goes 300’ more past the edge of the map, then stops. If the characters stay near one of the ends, there is a 20 percent chance a giant slug will transport through the wall and continue on its migration route. Once they start coming through, they will continue to come through at 10 minute intervals. But if three or more are killed, they stop and use another migration route. Yes, its a Gate. But it only allows Giant Slugs, and the slugs don’t know its a Gate. Yes, someone could come up with a method to become a Giant Slug and follow the path, uhm, migration route. But what is that character going to do if thousands of giant slugs realize the character is not one of them, and they attack ?

Glowing globe is the blue circle about 3’ above the floor.

They have been told to guard it with their lives. Its very important.

Its really a trap.

Any being that touches it, it will move to the back of their head, one foot above and behind. They cannot get rid of it short of a Wish or Limited Wish. If they grab it with one or more hands, it sticks to the hands, it will stick to their feet. 2 Remove Curse to get it off of their hands, but it will still follow them everywhere glowing with the light equivalent of Continual Light. Hope the victim isn’t someone who needs to be stealthy ! I took pity on my original players and allowed them to get it behind a stone door and run for it ! It had broken through a wooden door they tried to force it behind.

I used to think about letting it haunt that player. Kinda of like the
crocodile with the clock in it haunting Captain Hook.

“You see a small glowing sphere on the horizon, headed your way…”

But I decided not to.

The feet bit above ? He got it stuck to both hands of his character. Then tried to push it off his hands with his feet. It rotated. Knocking him out for 10 minutes. Stone floor. Good thing he wasn’t near water. Thats when they used Remove Curse to get his character’s feet and hands loose. They then got it behind a wooden door, which it broke getting back to its new owner. Then they tried a stone door…

No treasure, will bargain to be set free. Will inform party there is a
special method to get from Sraa Keep to under Fondfield, or as some
call it Moj. The dragon is chained to the floor by his right rear
leg by a metal ring in the floor. Can talk, but has no spells.

If freed, will vanish.

If attacked, will try to defend itself. Its of Neutral alignment with good tendencies.
Alignment of Lawful Goods would be affected if they attack this dragon.

gelatinous cube on the ceiling

East secret door opens to a male touch or Knock. 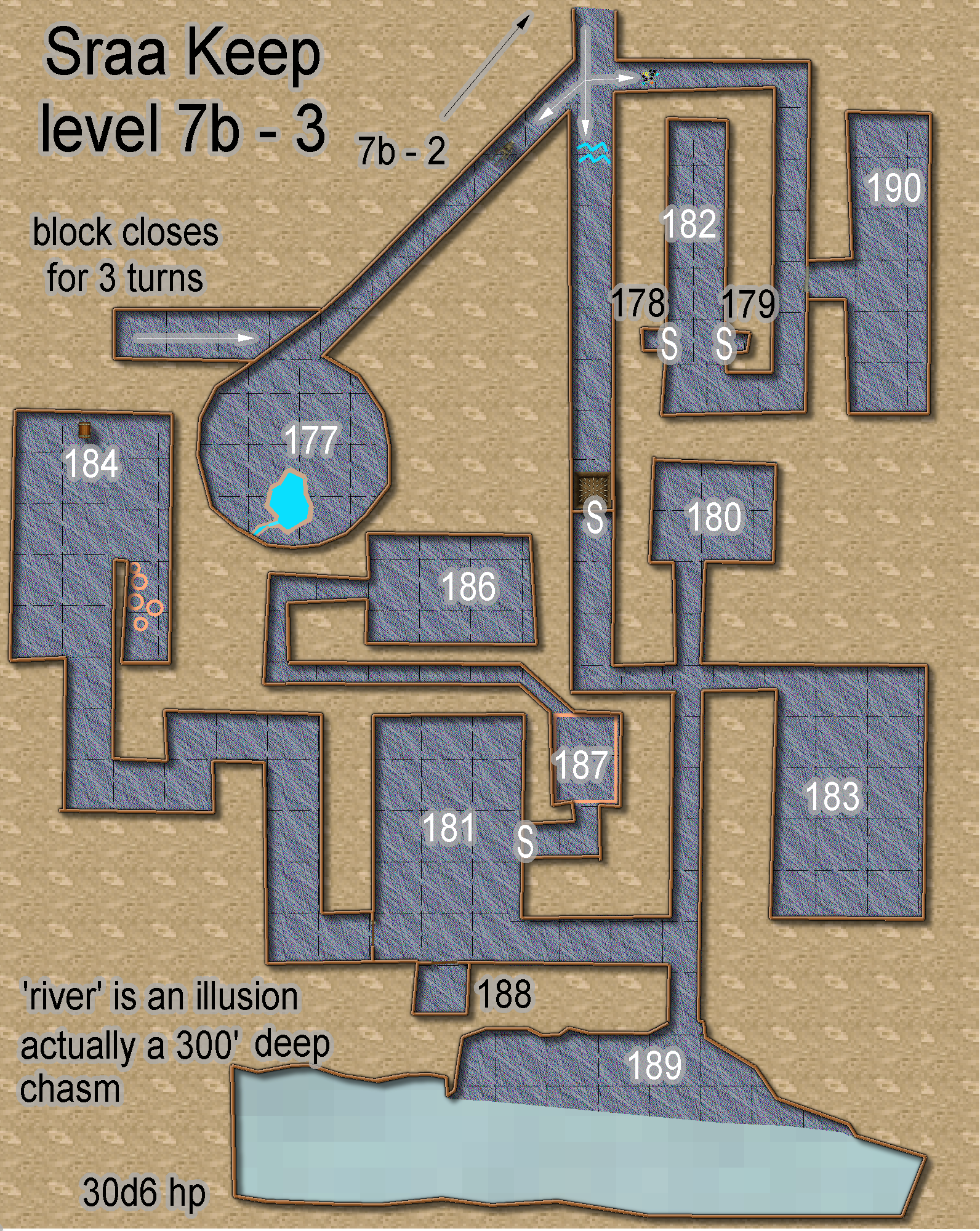 Any drinking from pool causes the block to close off the room
for 3 turns and a loud bell rings at one minute intervals for 10 minutes.

The pool detects as magic, but not as a trap.

Secret door opens after the invisible ballistas fire in room 182

Secret door opens if someone in the party dies or they can use 2 Knocks.

“On Alternate sometimes the ways of Amber are very expressive:
‘The way about is sometimes found by those who imbibe frugally.’”

While that is gibberish, any reasonable explanation of the above quote,
the secret door will open or any human woman touch.

Invisible ballistas, each does 2d6 hp.
They attack as third level fighters, only fire once.

writing on the west wall

“To those who believe we are the same,
you are wrong.”

this cavern appears to have a river running through it,
but the river is an illusion. 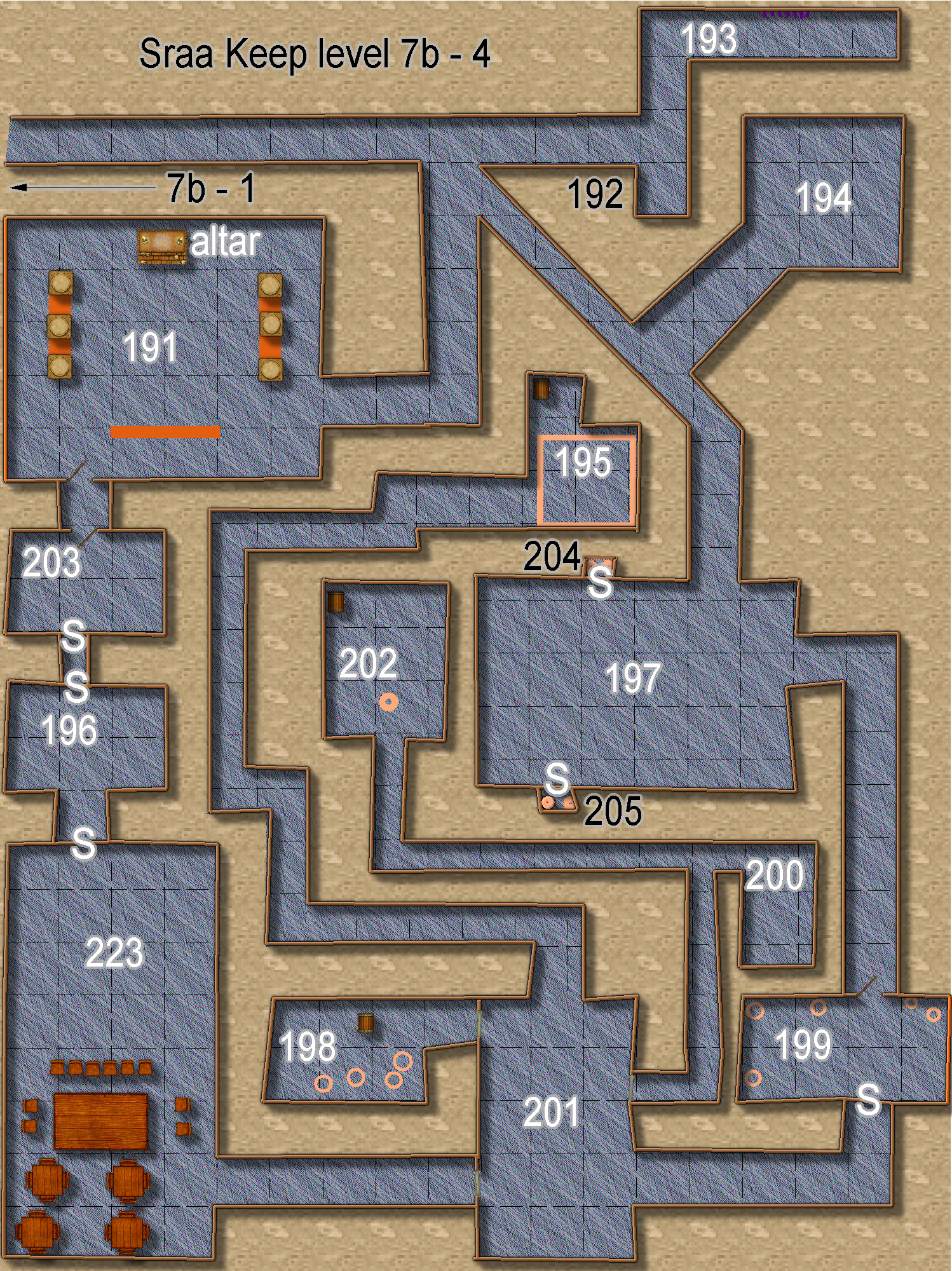 The walls glow blue-green. Any who detect evil will find it in abundance.

The room is empty when the party arrives. If they stay longer than 30 minutes they will hear a deep sonorous singing coming down the hall. The Priestess and her Acolytes appear from the door to the south. The Priestess is Morgan Le Fay who will have the appearence of a man. If engaged in conversation will laugh manically and her appearance will change to that of a woman in flowing robes. Then her and the entire group vanishes, laughing.

If any attack them, the weapons go through Morgan and her group with no affect. They will then vanish.

There is a smooth stone alter of marble at the north end of the room. Touching it: 50 percent chance any one attribute will raise or lower by 1 permanently. 51 percent or higher then lower 1d6 attributes by 1 permanently.

There is a painting of a three-headed dragon on the north wall.

If any of the group state words to the affect: “I wonder if ( or hope that isn’t a
gate its behind.” or “I hope its just a painting.” the monster will gate in
and attack. If anyone gets the alter between them and the dragon, the breath
weapon is blocked. Its breath weapon is a multi-colored fire. Use regular
dragon fire breath info for damage.

this room is a trap, but Detect Traps wont work here.

On the North wall is a group of 7 buttons. Under these buttons is a small tray
in front of a slot in the stone. The buttons are numbered 1 thru 7 in Common.
When 5 buttons have been pushed, a bell rings ( small bell only heard in this room).

button 4) pusher starts floating around the room. Remove Curse or Dispel Magic, but
only Heal has a permanent affect. If Heal not used, every 3 days
the PC will feel lighter and lighter, then start floating away.
Hopefully not while outdoors.

button 6) a blue gas starts coming from the slot. The exit closes. All HP lost
are restored. All clerics get, if used, one level one spell back.
The gas disappates, maniacal laughter resonates about the room,
and the exit opens.

when looking into or walking through this room, will seem 200’ × 300’ × 70’
when the party approaches the North wall, a secret door slides into the ceiling.

It will appear to be 60’ wide and 70’ high. When the group looks back,
they will see the true dimensions.

glowing red letters on the South wall appear and read as follows:
“Still wandering around I see !”

they fade out then the 2 secret doors to rooms 204 and 205 open,
the contents of those rooms then attack.

scattered on the floor: 150 Isle of the Jester PP

If anyone says words to these affect, “I wonder what these monsters were guarding ?”

Red letters appear on the south wall, “So would I, Strazl”

Then the secret door opens.

3 buttons on the south wall.

Pushing any of them causes the room to shake. Save vs. Dexterity with 4d6.
Any character that fails, falls and takes 2d4 hp damage.

sign in red glowing letters on South wall
“Choose the right and win, Choose the wrong and lose.”

Kobold cowering in one corner. Actually a polymorphed young woman.
Polymorph back, 86 percent chance to be okay.

at the tables is a large party in progress.
The explorers will be asked to join the party. “We’ve been expecting you !”
“Strazl said you might drop by !” If they refuse or attack,
the party goers vanish. Otherwise they ignore the characters.