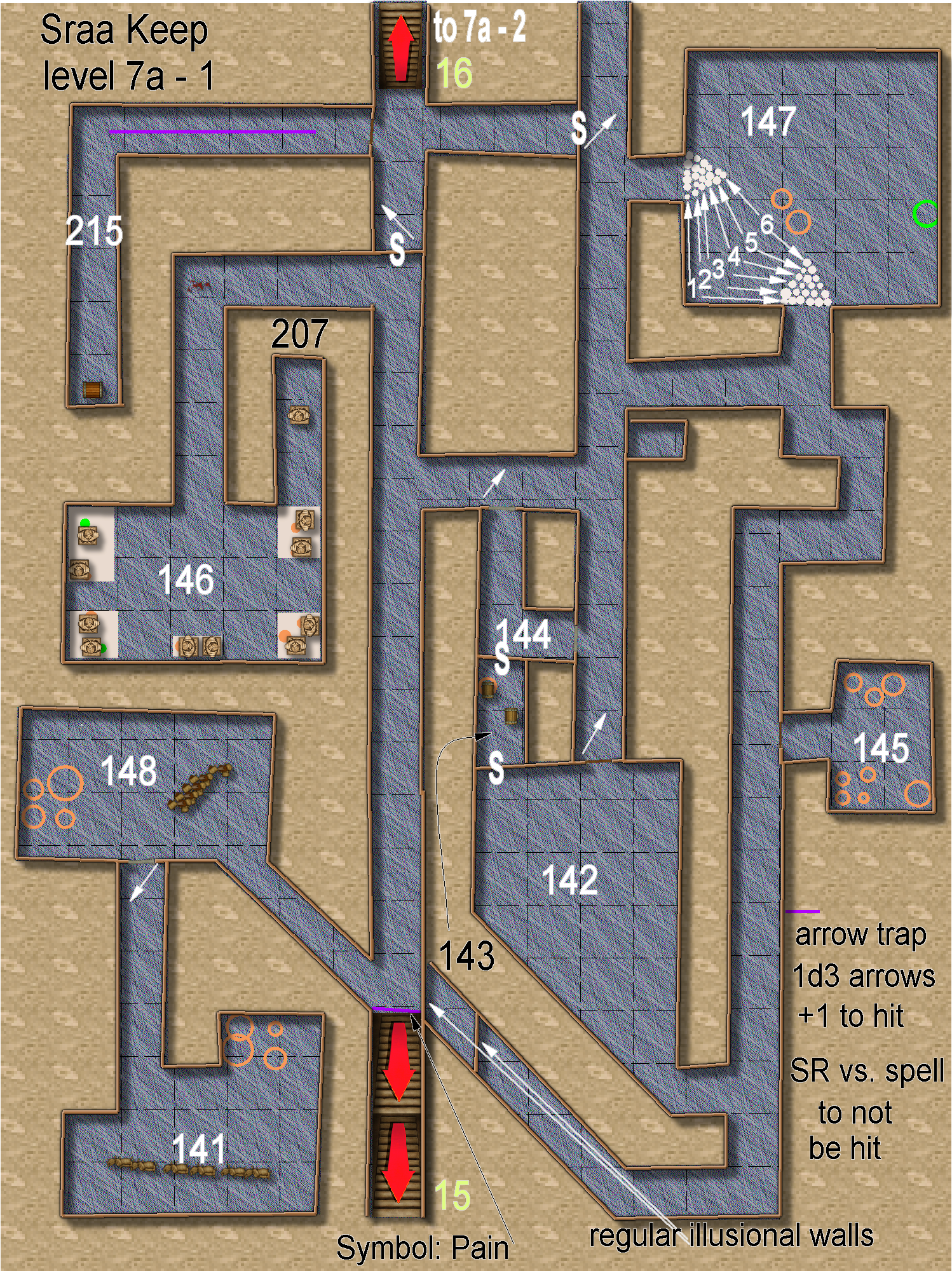 painting on south wall of a sailing ship in a storm at sea. The ship glows
a pale green. if anyone touches the ship, all torches go out and the person
touching it glows pale green for 1d6 +4 turns.

( if the anyone looks closely at the stern of the ship, they will see:
‘The Flying Dutchman’ ) My players and I had a little interaction going between
them and the painting.

“easy come easy WENT, to go BY sea or a way that is more SECRET
than a mine or TUNNEL TO the cave of the fearsome MOJ.
well, dwarf, it is up to you to reveal the words.”

North secret door: will open if the dwarf reveals all of the message
and the capitalized words. Nothing else, short of a Wish, will
open that door. Of course, the characters could always go around.

the walls glow a sickly yellow

push on left side of secret door

East wall a painting of a man holding what appears to be a gold mask in front of his face.

Any lawful touch painting: 1d6 hp and in 5 turns start to weaken in strength and constitution ( -1 per round). Stops at the end of 1 turn, and slowly go back up at the rate of +1 per turn.

Any chaotic touch: ( only works once) gets a Limited Wish, if use this limited wish to help a lawful being, the chaotic being takes 2d10 hp with a minimum of 5 hp

You could easily call this a major trap room.

All figures are on a 6 inch high stone platform

A cloaked figure is racking a young woman
the cloaked figure is a Zombie: cannot be turned
the young woman is a female wood elf Fighter 5, Chaotic Good
6 months after rescue, the group will receive 75 pp and a
Ring of Protection +2. She will help fight if given armor and weapons.

South west corner:
A cloaked figure is choking a small boy
The cloaked figure is a wraith and will act like a Zombie until meleed
The young boy is a Brownie, wont fight. But 6 months after rescue party
will receive 100 pp and a dagger +1

The figures are Statue spelled and then illusioned to appear as they are
described. Stepping on any platform or opening the chest will activate
all figures and change them from stone to flesh, but the illusions stay.

opening it shows a young woman who has been beaten and placed in the chest. is actually a Succubus. Will kiss the first person who reaches into the chest. 1,200 pp; 150 sp; one 12,000 gp jewelry of platinum and a large ruby. five 1,100 gp wrought gold necklaces; five 300 gp ivory bracelets; 1 metal jar with a potion of Frost giant strength in it. chain mail +4 (human sized 5’ 6” to 6’ 3” tall); Cloak of Elvenkind; Amulet of Proof against Detection and Location; bone tube holds a scroll for Illusionists: 6 level 4 spells 1) Shadow Monsters, 2) Massmorph, 3) Emotion, 4) Improved Invisibility, 5) Emotion, 6) Confusion [ chest is 25,007.5 gp equiv] also see room 207

Illusion of 2 Ogres counting the money in a large chest

After all characters are inside, 2 feet in diameter rock beams in and appears at 2 second intervals at points marked. Only the usual spells to remove rock will work: Passwall, Rock to Mud, Knock; they can use Lightning Bolt but those will bounce.

Manacled to the far wall is an elf, illusioned to be a ghostly figure. Sella is a Chaotic Neutral, high elf: Fighter 3/Magic-User 3/Thief 3 Touch or spell to dispel the illusion, if rescued will join the group.

( Yes, I know such quartets probably didn’t exist in the Middle Ages, but this is such a deadly dungeon I wanted to add something to lighten up the situations.)

Demon type 6 appears to have back to the party. This is an illusion.
He is actually facing the party. If they don’t cast Detect Illusion, they only have a
5 percent chance to spot it. Otherwise the Demon has surprise for 2 melee segments.
Chest:
2,000 ep; 100 pp; nine 100 gp gems; Bag of Transmuting; Metal jar potion of Climbing; ivory tube containing magic-user scroll: 1) Scare, 2. Leomund’s Trap

Chest: trapped: if opened the door locks and the east-west part of the room
lowers at 5’ per turn. At the end of 20 minutes, only the north-south part
of this room is stil here.
Scroll: 3 Passwall spells, with a small bag of sesame seeds attached to scroll.
Scroll: Disintegrate with a small bag containing a lodestone attached to scroll
Scroll: Word of Recall ( Cleric runes on outside of scroll ‘use this for your
escape’ check for failure all 3 scrolls, but they all work anyway.
If the Word of Recall scroll is used, it takes the caster to level 5 room 68.

Special Note: stairs 16 goes under the passageway to room 154

There are metal rungs that go from the passageway down to the stairs.

Rooms 151 and 152 have drop offs down to the stairs and passageway.

green arrow painted on floor points to northeast corner
East secret door: touch by anyone and it opens

They will slide and go through the painted paper wall between this room
and the stairs. 5 percent per character to notice its not rock.
character falling distance and damage taken
Feather fall ring or spell will save
Special Note: stairs 16 goes under the passageway to room 154
Stairs 16 leads to level 8, Strazl’s and his pet’s location.

a woman is working in this room. She is totally oblivious to any who approach
or try to talk to her or try to touch her.

If any of the group wishes her well, or words to that affect, the following occurs.
Her arm, no matter how long it has to extend to reach, touches the person
who said that to her, on their nose, regardless of what is in the way.
roll 1d4

the plug shown in the passageway will close off retreat and remain closed until all
monsters or all characters are dead.